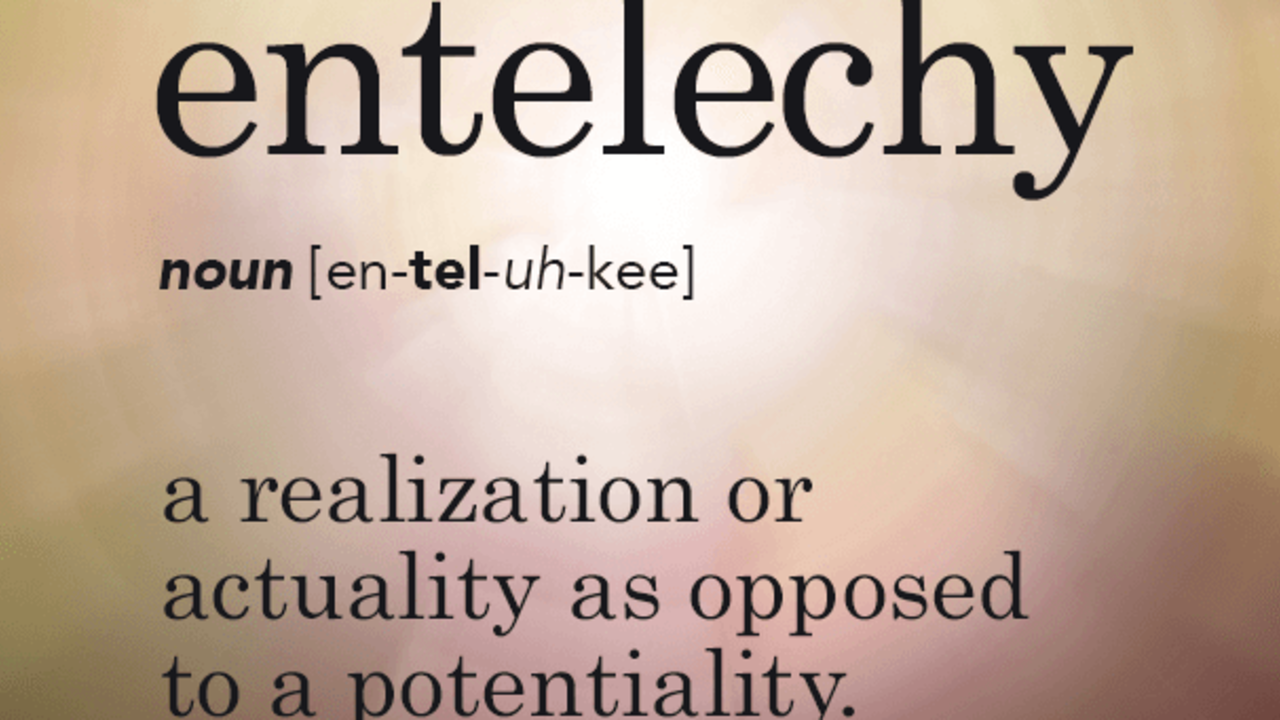 The Quest For Entelechy

My Quest to Understand Entelechy
I learned a new word this week and wanted to understand it more fully. It elegantly captures, in just one word, something that companies strive for and people yearn for… something that few of us truly focus on in our day-to-day despite the expectations of others and our own yearnings.

The word is entelechy. Never heard it before? Then you’re not alone. It just isn’t a word that is commonly used. That’s a shame, too, because it is a powerful word.

Entelechy, from the Greek entelecheia means “that which turns potential into reality.”

I think the second part of the definition is easy to understand. Turning potential into reality is the heart of innovation, the soul of creativity, and the ambition of inventors, entrepreneurs, and leaders in virtually every discipline.

Aristotle made distinctions between potentiality and actuality. In his writings in De Anima (“On the Soul”), he distinguished the stuff things are made of (matter) from the form, essence or function needed to bring together the stuff or elements. The end product, driven by a precise combination and dependent on many variables, was his actuality or reality. All the pieces, uncombined, were his potentiality – without the precise combination, the potential of these elements could not be realized.

But Aristotle stopped short of describing what could drive the end product. I was looking for more concrete definition. “That which turns” seems deliberate to me, actionable, accessible even.

So that led to a study of the theories proposed by 17th century German philosopher named Gottfried Wilhelm Leibniz. He believed that entelechy is a self-directed activity. In other words, to turn potential into reality requires self-motivation, focus, and commitment. This makes sense to me… But it left me feeling a bit disappointed. I’d hoped that the “that which turns” would be something more tangible.

Enter next the theories of Vitalist philosophy which externalize entelechy, calling it “a vital agent or force directing growth.” But considering that Vitalism is built on the premise that the processes of life are not explicable by the laws of physics and chemistry alone and that life is in some part self-determining, my quest to understand entelechy began to feel somewhat circular.

I almost gave up, feeling that the promise of entelechy was not actually as inspiring as I’d first thought.

But then I struck gold. Jesuit scientist Teilhard de Chardin provided the definition I needed for “that which turns.”  He said “Entelechy is inside of you, like the butterfly is inside of the caterpillar… it is the entelechy of an acorn to be an oak tree, of a baby to be a grown-up, of a popcorn kernel to be a fully popped entity, and of you and me to be God only knows what.”

Ultimatley, Chardin and others have landed on entelechy as “what we are coded to be.” However, what we could become is conditional or situational. The code needs to be read and deciphered just like popcorn needs sufficient heat to pop.

In the case of entelechy, however, the conditions or situations needed are our own to create, find, or maximize.  “That which turns” is our own belief in the merits of becoming what we can be. Leaving it up to fate, not embracing the quest to self-actualize our own potential, or getting complacent in our own cocoon means that we never turn our possibilities into realities.

So Aristotle was right. The elements can all be there, circling and just waiting to be pulled together. And Liebniz had it right, too, even if his dry description was not inspiring enough to propel me forward. And the Vitalists got the part about self-determination. Now, I see it. It is all coded, waiting for “that which turns” to bring the possibilities inside of me to reality. And the “that which turns” is none other than… me.